My dad died in February 2004. Today would have been his 81st birthday. I’ve thought a lot about my dad in the past 10 years. Good times. Bad times. The last times. 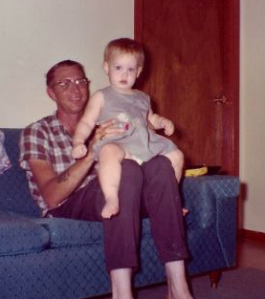 It’s bad form to speak ill of the dead. I guess we’re supposed to remember people only for the good things. To say that I had an awkward relationship with my parents is a gross understatement. Years of therapy have allowed me to see things more objectively, to admit my own mistakes and to appreciate the importance of forgiveness.

I loved my dad, and he loved me. He was not a patient man. He did not like being disappointed by his children, but he was of an era where parents didn’t consider if (or how) they disappointed their children. As an adult with a grown child, I am sure I disappointed my son, but that’s a blog post for another day.

Kids – being children, not grown, not fully formed, not completely educated adults – will do things wrong. They will make bad decisions. They will lie to get what they want or to avoid getting punished when they know they should be. Did my dad forgive me for disappointing him? I hope so.

I had a moment with my dad a couple of months before he died. I think he was proud of me. I think he liked the person I became. But I wonder if he would have ever admitted to his own faults?

Not speaking ill of the dead also means we must not lie about their lives. Nobody’s perfect. My dad did a lot of great things. He served in the U.S. Navy. He earned a college degree. He adopted his new wife’s children when they married. My dad worked hard, moving around the United States with Chicago Bridge & Iron. He was an engineer, but he wore khaki or green cotton duck work-clothes, steel-toed boots and a hard hat at work. He had a solid, middle-class work ethic. His one blind spot: His wife. My mother. It wasn’t until after his death that I really saw that.

It was a bit of an epiphany. It wasn’t that he didn’t love his children. Obviously, he did. But he always sided with mom. Except the one time he didn’t. I remember it like it was yesterday. He stood up for me, when my mother was once-again berating me for being whatever I was being at the time. Thanks, dad. That meant a lot – and I needed it.

After he died, I learned that he was the glue that held me and mom together. Without him, I wasn’t willing to – no, not capable of – being manipulated in the way only a true narcissist can manipulate. So, we don’t have a relationship. I think my dad would be pissed at me, but he would also be pissed at her for not trying to fix it.

So today, on the anniversary of my dad’s birth, my mother thinks of her husband, and I think of my father. And we focus on whatever memories we choose. You can’t pick your family. But as screwed up as we are, I wouldn’t be who I am, right now, without all of that… stuff. So, thanks, dad. I love you.